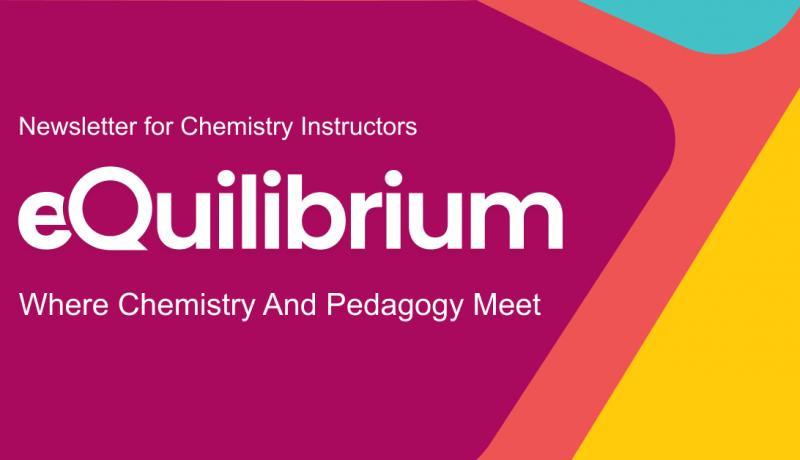 Welcome to the third edition of Equilibrium!

Some chemistry topics are close to our hearts and we like to teach them, while others might be more challenging. Some topics can confuse even the most seasoned and well-versed instructors.

To help us better answer students’ questions — and present material in a clear and engaging way — educators are sharing their pedagogical content knowledge with the community. Three instructors give us their take on topics below!

In this issue of Equilibrium:

PE and KE in a Macro vs Micro World 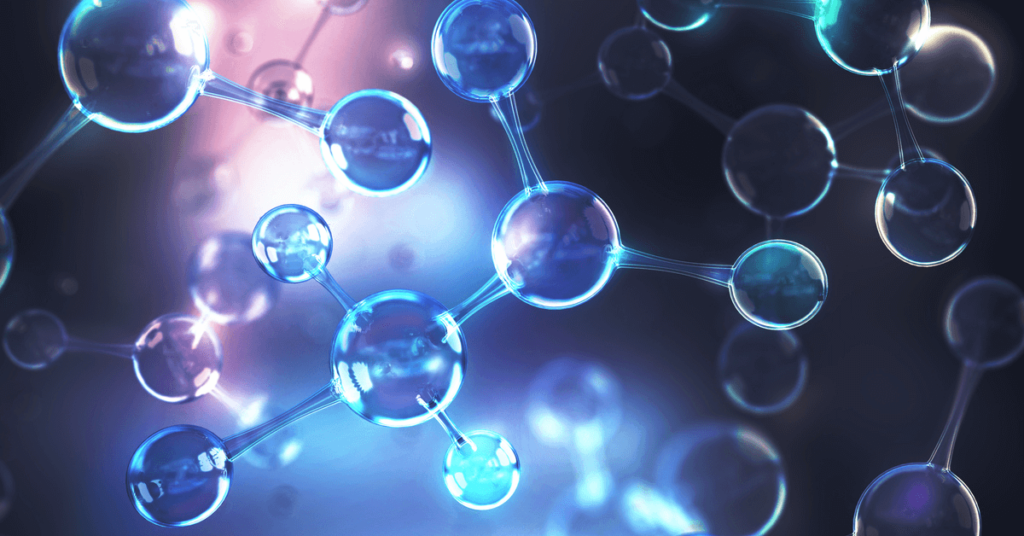 Question: I introduce concepts of potential energy (PE) and kinetic energy (KE) to students when I talk about the first law of thermodynamics, internal energy, and enthalpy. When reviewing popular textbooks I keep seeing that many describe PE and KE using an analogy of rock rolling downhill, they talk about work, heat, etc. but never make a connection between rolling boulders and interactions of atoms and molecules. How do others relate the PE and KE of the macro world to the atomic and molecular level?

First, we do need to understand potential and kinetic energies at the macro level. That way we can compare and contrast it later with the micro level.

As a boulder rolls down a hill due to gravitational pull, its potential energy (PE) converts to kinetic energy (KE). However, in many situations, not all PE can be recovered as KE. In those cases, the process by which the PE is converted is “dissipative.” Dissipative processes are common. The most prominent is friction. Rolling a boulder up a hill is easier, and takes less work, than pushing it up without rolling. The difference is due to the friction between the boulder and the ground, which is greater in sliding than rolling.

Similarly, the same problem occurs with atoms and molecules, at least for solids and liquids. Unlike gases where molecules are too far apart, friction plays a more prominent role in solids and liquids. In these latter states, constant exchange of PE and KE occurs for each molecule in interactions with the many other molecules surrounding it.

Another example of the dissipation of energy can be found with an apple high in a tree. Its mass was moved up there, tiny bit by tiny bit, by the vascular system of the tree. Therefore, its PE is higher hanging from the tree than if it were on the ground.  Now say we put a bucket of water under the apple, and cut its stem. The apple moves faster and faster as it falls, and PE is converted to KE. But upon hitting the water,  it stops. What happened to the KE? It was dissipated in the water. If you studied thermodynamics, you know that this dissipated energy must result in a rise in temperature of the water. You can confirm this if you have a good enough thermometer and measure the temperature change. The energy is still conserved, but not within the apple.

During bond formation on an atomic and molecular level, we also have to consider entropies of the system and surroundings. When heat dissipates from a system, it goes into the surrounding and raises its entropy. For spontaneous bond formation, this entropy increase must be greater than the entropy decrease of the system resulting from atoms sticking together. Unlike apples falling from the tree, gravity plays almost no role for molecules, because other forces (electrostatic in nature) between them are much bigger than forces between the Earth and molecules. Instead, some of the PE comes from intermolecular forces and some from the vibrational energy of atoms or molecules.

PE is the highest when atoms or molecules are infinitely apart (ie. they are in free space). As they get closer in distance, their potential energy drops due to bond formation or intermolecular forces. Thus the more atoms there are, the lower the PE.

What distances are we talking about? The attraction begins at distances greater than that where electron clouds overlap. These are dispersion interactions, due to the presence of instantaneous dipoles of the atoms. The distance at which it happens depends on the specific molecules or atoms interacting. For N₂, the molecules are about 220 pm long, twice the bond length. So at distances greater than that, attraction dominates. For shorter distances, repulsion dominates. For the unusual case of He₂, the length of the “bond” (arising from dispersion forces) is 5200 pm! In principle, the forces extend out to infinity. But as far as we have been concerned, after about 1000 pm = 10 Angstroms, we don’t bother.

Net attraction increases as atoms get closer. Here, the attraction of each nucleus for the individual electrons in the other atom, repulsion between electrons in different atoms, and the repulsion between the nuclei come into play. Hopefully by considering the different forces at the atomic and molecular level, your students can understand potential and kinetic energy as it relates to the macro world. 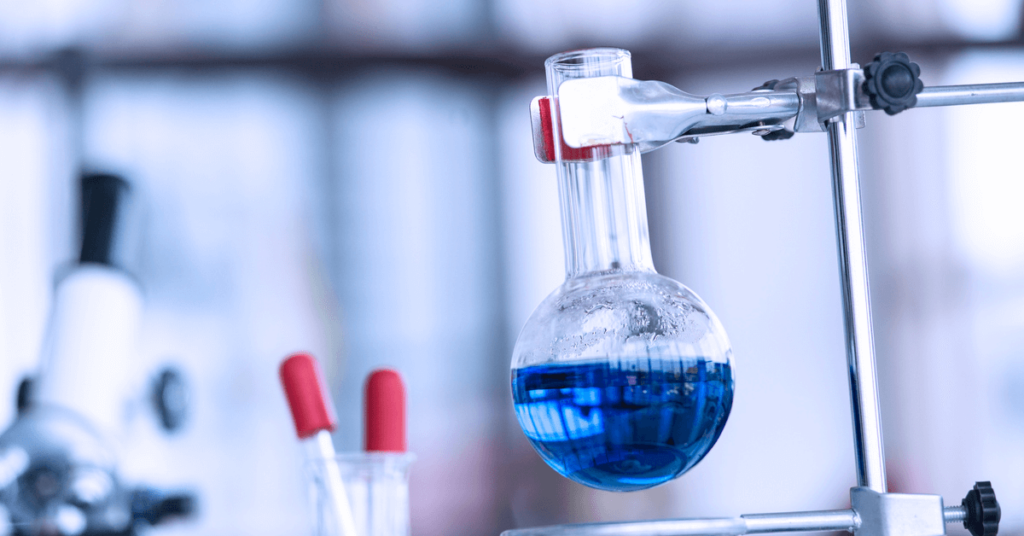 Question: Students often confuse stability and reactivity of a compound and kinetic vs thermodynamic regulation. How can we make it easier for students to distinguish kinetically and thermodynamically stable products? 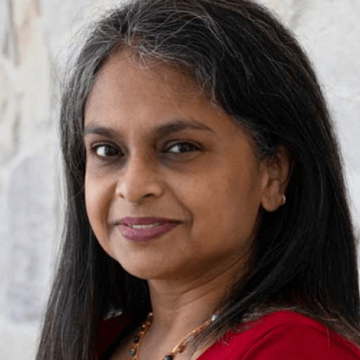 There are two ways the stability of free radicals can be discussed: (a) Inductive Effect and (b) Resonance effect.

The inductive effect is a donation of electron density through the sigma bonds of the molecule. The electron deficient carbon atom of the free radical is stabilized from the alkyl groups bonded to it. The more alkyl groups attached to it, the more stable the free radical is. The resonance effect is the delocalization of the single electron adjacent to the pi bond. Thus methyl (least stable) < primary < secondary < tertiary (most stable).

2. Carbocation (carbon with three bonds and no electrons, incomplete octet and a positive charge)

Similar to free radicals, there are two ways the stability of carbocations can be discussed. (a) Inductive Effect and (b) Resonance effect.

When the reaction between 1,3-butadiene and one equivalent of hydrobromic acid takes place, two products are formed. One is the kinetic product while the other is the thermodynamic product:

To understand the formation of the two products, we should investigate the reaction mechanism. The reaction takes place via Markovnikov addition to form a more stable allylic carbocation.

Step 1: Formation of the carbocation. This is also the rate-determining step.

Step 2: Reaction of bromide ion with the resonance stabilized carbocation (I) and (II). Depending upon the temperature of the reaction, one of the two products is more favored than the other.

Now let’s take a take a look at the reaction energy diagram of this step: 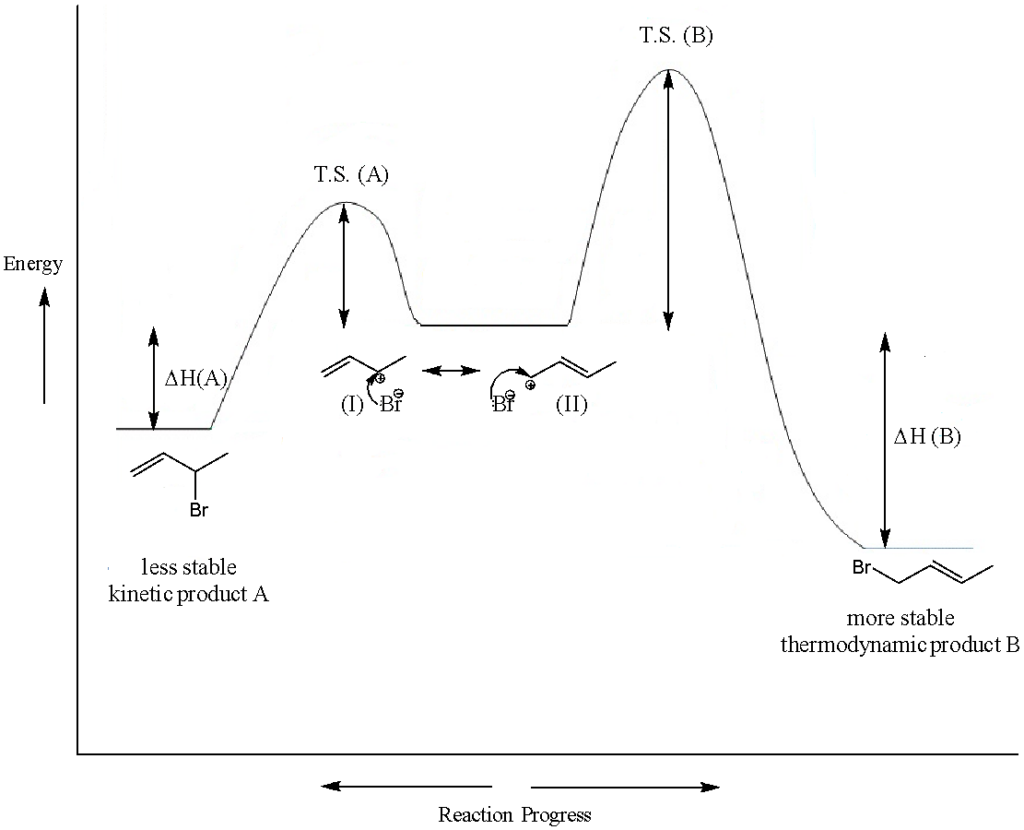 Figure 1. The reaction energy diagram for step 2 of the mechanism. After the formation of carbocation takes place, the bromide ion can collapse with either carbocation (I) to form product A. This is the Kinetic product that is formed from a more stable reactive intermediate (secondary allylic carbocation (I), is formed at lower temperature (-80 °C), and has a lower activation Energy [T.S (A)], so is formed faster). However, the product itself is not stable (overall higher energy, smaller ΔH) as the alkene is monosubstituted (alkene bonded to only one alkyl group). When the bromide ion collapses with carbocation (II), it forms product B. This is the Thermodynamic product, which system has enough energy at 40 °C to cross the higher activation Energy [T.S (B)], to form a more stable disubstituted alkene (alkene bonded to two alkyl groups). The Thermodynamic product is more stable, has overall lower energy, larger ΔH).

Looking at the structures of the products, a simple definition is that the kinetic product (A) is the product that is formed from a more stable reactive intermediate (secondary allylic carbocation (I), is formed at lower temperature, and has a lower activation energy so is formed faster). The thermodynamic product (B) is the product that is the more stable, more substituted alkene, is formed at higher temperatures, has a higher activation energy, so it is a slower reaction. Having your students understand the mechanism of reactions as it relates to the reaction energy diagram can help clarify the difference between the kinetic and thermodynamic product. 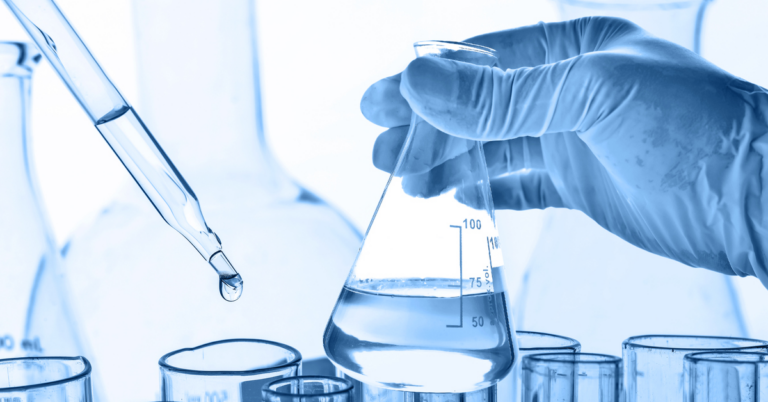 Question: Many textbooks suggest “a shift in equilibrium position” towards the reactants or products side in accordance with Le Chatelier’s principle. How can we explain the concept of the equilibrium’s position in relation to Gibbs energy when products are added/removed? 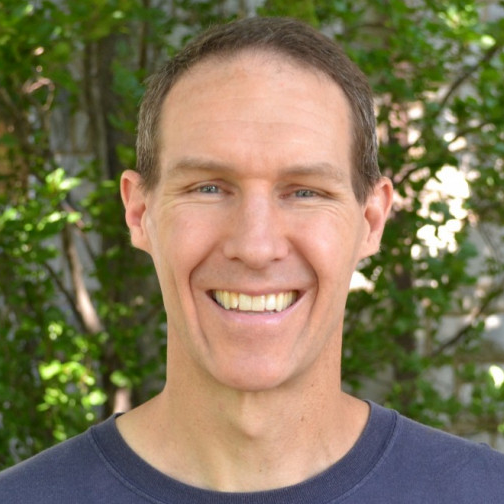 A system will decrease its Gibbs energy to move to equilibrium, where the Gibbs energy of the system is a minimum.  How does adding or removing a reactant or product cause the system to respond?  Le Chatelier’s Principle tells us that the system will respond to applied stress by moving to reduce that stress. (A life lesson if ever there was one!)  But what does that mean?

The figure below shows the Gibbs energy as a function of the extent of reaction, ξ, for a generic reaction A ↔ 2B.  (The extent of reaction is a measure of how far the reaction has proceeded.  It depends on the stoichiometry of the reaction and the initial number of moles.  For this reaction, if there are initially 1 mole of A and zero moles of B, ξ will range from 0 to 1.  ξ = 0 means all A and no B, and ξ = 1 means all B and no A.)  Let’s imagine that this reaction has its minimum Gibbs energy when ξ = 0.19, and that is equilibrium.  At equilibrium, the ratio of the concentrations of the products divided by reactants equals the equilibrium constant. 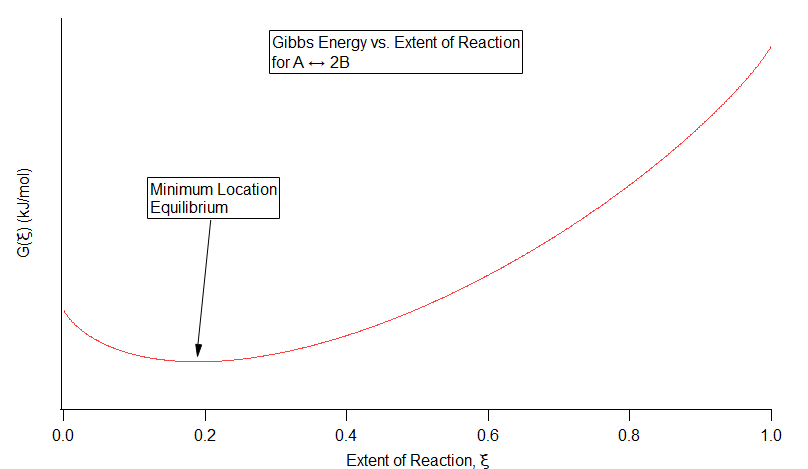 So what happens when we add more B to the system at equilibrium?  Doing that puts the extent of the reaction at a value greater than 0.19. (Exactly where would depend on how much B we added.)  As shown in the figure below, imagine that we add B so that ξ = 0.70.  The system is no longer in equilibrium, and it will move toward the left, using up B and making A to reach equilibrium.  In other words, we have added product, and the reaction shifts toward the reactants side to use up the products that we added. 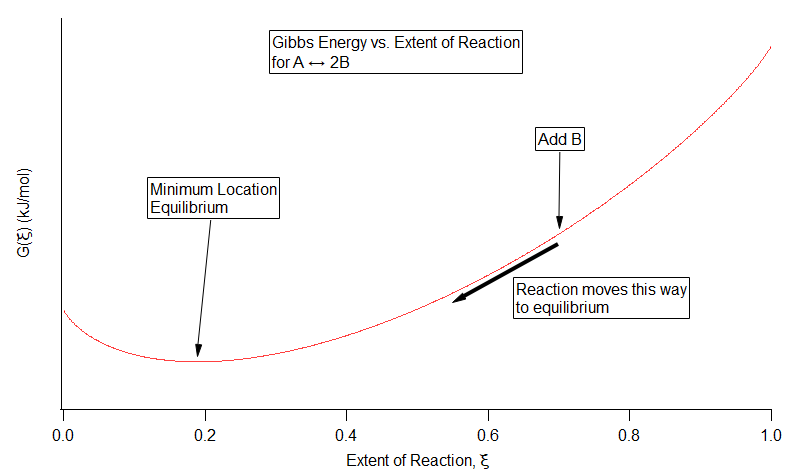 Similarly, adding A would put the system to the left of equilibrium, and the reaction would proceed by using up A and making B as it moves toward equilibrium.  To challenge your students, ask them what happens to the extent of reaction ξ if A or B is removed, and how the reaction will respond. 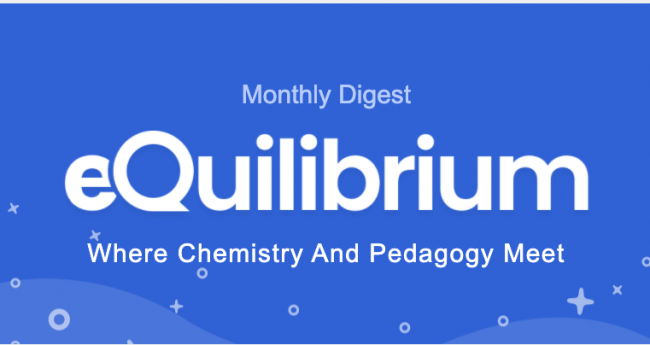 From mnemonics to misconceptions about chemical equilibrium to IMF! We hope you enjoy these practical insights from creative instructors and educational researchers.

Highlighting pertinent chemistry teaching strategies that may inspire you to try new ideas in your classroom! We hope this serves as a valuable resource for your professional development.

Speak to a Specialist

One of our Learning Specialists will give you a tour of the Aktiv Chemistry or Aktiv Mathematics learning platforms and provide a free instructor playground account with access to the content library.

I Want to Learn More About: